Head to Bir for a Life Changing Travel Experience!

Travelling to Bir, Himachal Pradesh was something my sister and I had been planning, since months. As soon as my exams ended, we packed our bags, booked our tickets and headed to the bus station to catch an overnight bus till Palampur. We left from our house feeling proud because we didn't forget anything but the one thing which we didn't keep a check on, was the time. After reaching the bus station we were frantically running everywhere to find our bus. Being the clumsy girl that I am, I even managed to fall badly and bruise my knees. But in the end, we tracked down the bus and everything worked out for us. 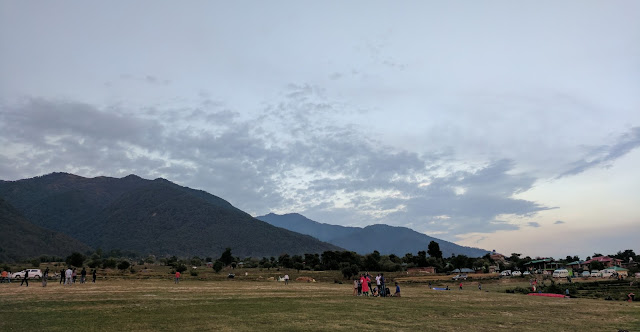 How to Reach
We took a cab from Palampur to Bir and it took us 45 minutes to reach but if you're planning to go from Delhi, you can take a bus. On the way back, we took the Himsulta Volvo from upper Bir and the bus dropped us to I.S.B.T Kashmiri Gate. From Delhi to Bir it will take you approximately 12 hours in the bus. I would suggest, take an overnight bus because you won't get to know where the time passed. The bus stops at every station for 5 minutes and at three to four places for dinner/lunch/breakfast and tea breaks.

You can get your tickets booked at-http://www.hrtchp.com/hrtctickets/ 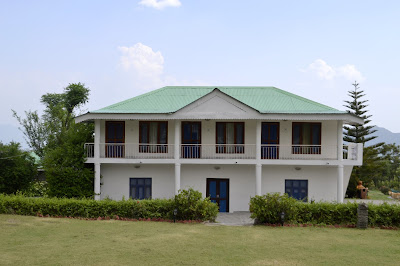 Colonel's Resort was the resort where I stayed for three days. As soon as I entered, I fell in love with the property. The resort has an overlooking view of the mountains and so much of greenery that you'll feel like staying outside the entire time. The resort has 15 rooms, tents for camping, a dining area with a verandah, a yoga room and a huge parking space. 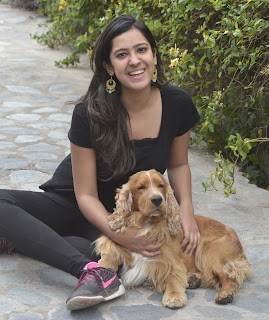 What took my heart away was the adorable pets of the resort. This one is a three year old Cocker Spaniel called Dash. For those who don't know this about me, I'm a hardcore cat lover but by the end of three days, I became very fond of Dash. I used to start my day by playing with him and sleep, only after I had spent a good amount of time with him.
Apart from Dash, Colonel's Resort is home to a Labrador called Frisky and two horses named Namta and Noorie. Oh, and I'm pretty sure I spotted some exotic species of worms and birds right outside my room.
One can easily pass his time in this resort by playing with these animals. They give so much of love to a person that you'll completely forget all of your problems. 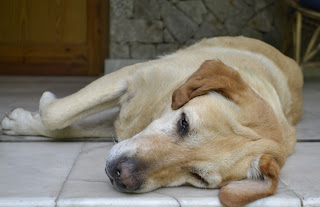 Food at Colonel's Resort was lip smacking. If you're diet conscious or a sucker for homely food, this is the place for you. For breakfast, we had a variety of dishes to eat like cereal, omelette, scrambled eggs (MUST HAVE!), cold coffee, juice and freshly cooked paranthas. For dinner on one night, we were served chicken, kadai paneer, mixed vegetables, rice, mushroom & peas and beetroot pickle. 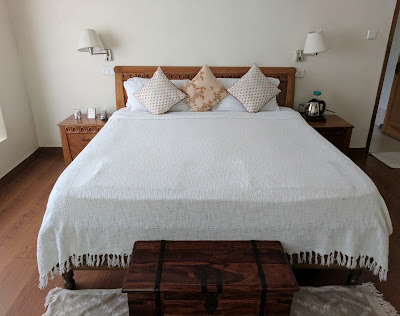 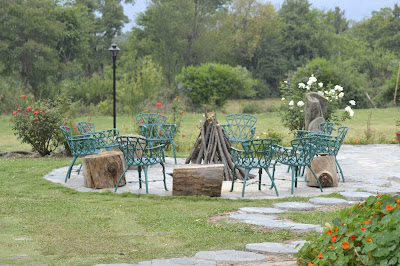 What to do there:
Paragliding (A MUST!)
Paragliding on the first day was not planned because one never knows the direction of wind in Bir. Our luck worked because when my sister and I were right in the middle of finishing a tasty red sauce pasta, we got a call from colonel, asking us to come back to the hotel so we could experience paragliding.
We were driven down till the paragliding point which was 14 km from the resort. The ride was pretty bumpy because our driver was in his full form to make us reach on u but it was totally worth it. With my sister's jokes on how we won't come out alive and the butterflies fluttering in my stomach, we hardly got to know when the ride ended. The first glance of the paragliding point was breathtaking. Mountains and mountains could be spotted along with 10-15 parachutes getting prepared for the flight. Some of the crowd who were going to do this adventurous activity were getting their pictures clicked while the others were taking off in the sky like it was no biggie. I, on the other hand was just concerned about my take off since I'm known to be clumsy just at the right time. 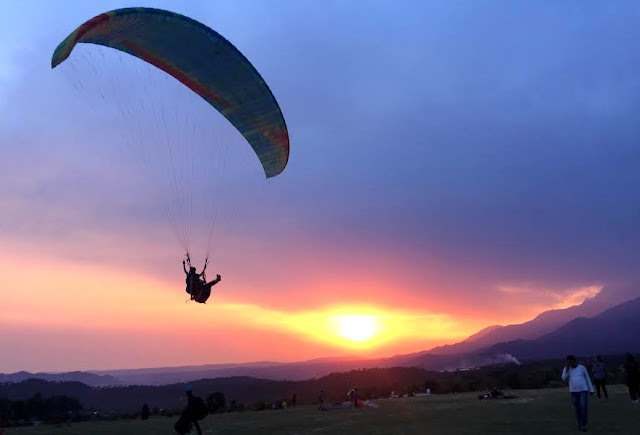 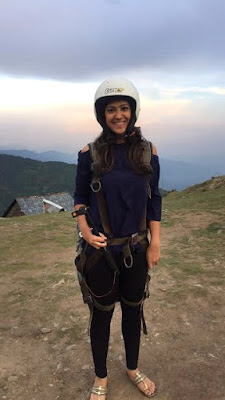 You're made to wear a bag which later turns into a chair in the sky along with a helmet. Those who want a Go Pro can get one on the rent to record the experience. We got two on rent (suckers for creating memories) and got all decked up for what lied head.
After you're all set and the wind direction is right, you are supposed to run as fast as you can along with your pilot who will be with you in the sky to make sure that you don't die. Run till the time you see nothing but the end of the cliff. This is the toughest part but after 10 seconds you'll get through and be in the sky like a bird. 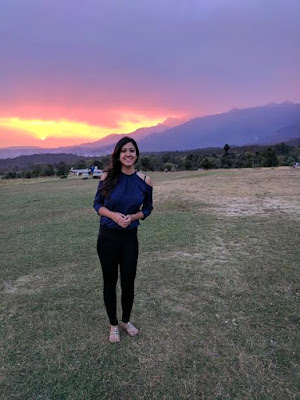 All those who asked me about my experience got the same reply. Paragliding for me as simple as breathing and so exhilarating that I can still feel the chills when I think about it. Once you're in the sky, you feel as free as a bird. On my right, the sun was setting and the sky had three colors, mainly pink, purple and yellow mixing together, forming a skyline one can only dream of. On my left were mountains and clouds with the sky in the color of blue. Sounds unbelievable, doesn't it? I was in the sky for precisely 13 minutes and in those minutes, I felt a mix of emotions. Life changing will be an understatement for the experience I had.
My landing was nice as my pilot was very helpful and had told me what exactly to do.

Vist the Monasteries:
For those who do not know what a monastery is, it is a place of residence where monks live in seclusion. They eat, study and pray there. Bir has so many beautiful monasteries that missing them out will be a shame. The prettiest out of the lot for was the Nyingma Monastery. See for yourself how pretty everything was. From the pillars of this monastery to the benches, the place was a burst of colors. 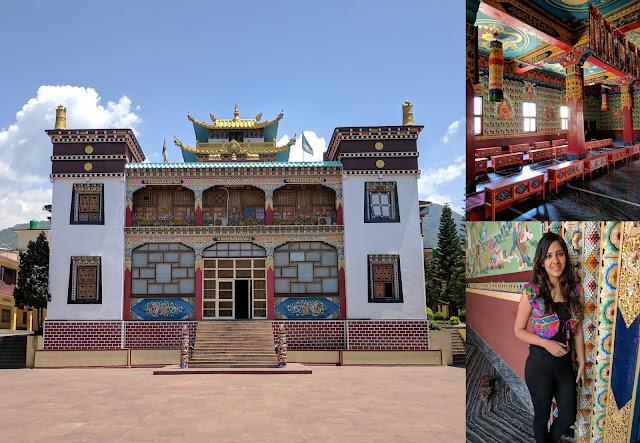 Tibetan Market:
Everything in Bir is nearby so you can walk to the Tibetan market with ease. The market consists of authentic Tibetan restaurants, local parlours, cafes, clothing shops and I'm pretty sure I saw a shop selling dream catchers there. When in the Tibetan market, do dine in one of the authentic local restaurants if you're game for trying on some Tibetan food. (Something you won't find in Delhi)
Once there, you can order Thenthuk, Shabaley (my personal favorite), Thukpa etc. We also had about hundred of momos! 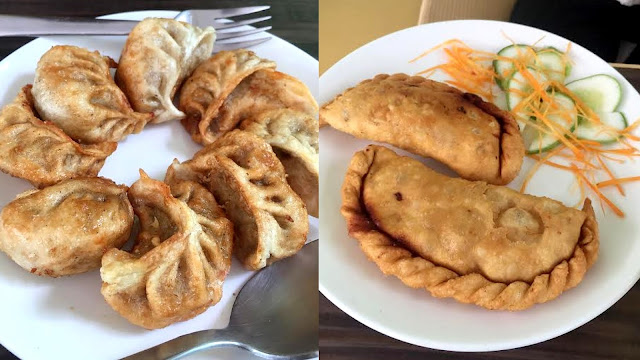 Where to Eat:
I've eaten A LOT in Bir. When you're travelling with a food blogger, you have no choice but to indulge in every dish that is brought to your table. These are some of the places you HAVE to visit when in Bir-
Garden Cafe: This is a hidden gem of Bir. The cafe is made inside a house so it's quite possible that you might miss this one if not attentive. Garden cafe is that typical cafe which has a pretty seating, a huge menu and cutlery which makes your dish look impressive. We went there twice in a matter of three days and even that seemed less. This place is the hub for artists, singers and anybody & everybody who wants to chill and soak in the constantly changing weather of Bir.
Must haves- Garden Cafe Special Pancake, Cappuccino, Pizzas and Pastas. 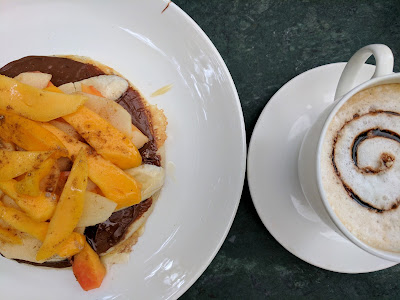 Clouddoor Cafe: This cafe is situated on a deserted road but is completely safe to go to. If you're a pizza lover, going here for an early dinner would be a good option. They have an open oven which starts operating after 6:00 PM. Oh, and their drinks are to die for! 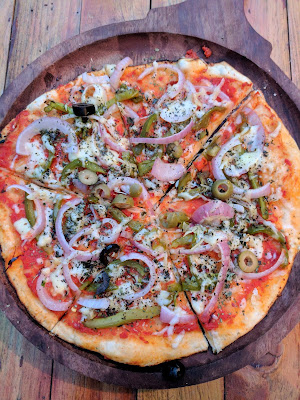 Things to Keep in Mind:

Disclaimer: The blog post was done on an invitation from the resort but the views are completely unbiased.

Posted by Shweghna Gursahaney at 05:14