For All Those Who've Experienced One-Sided Liking

After trying my hand on hard core fashion writing for 5 years now, I decided to focus on lifestyle blogging for a while. As my college has begun, taking out time for shoots has somehow became a huge task. (Although I'm soon gonna post fashion shoots on the blog)
Opting for journalism and mass communication in college has helped me realize that there's so much more to writing than I was aware of. Fashion writing is still my forte but wouldn't mind giving lifestyle writing a shot!
And here's my first attempt at that.
Ours is a generation which falls in and out of love every day. Liking somebody for real is life changing.
Anything that's life changing requires work and that's something many are not willing to do. 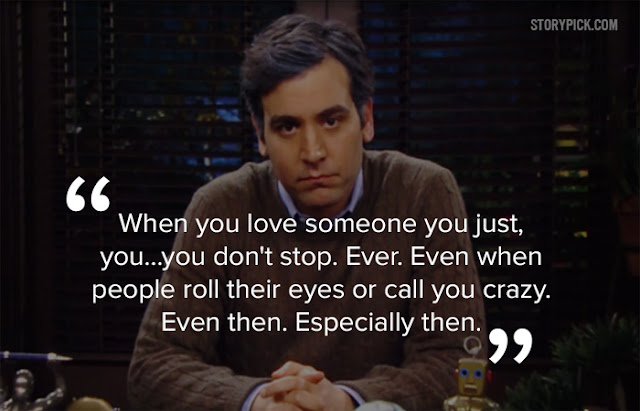 This post is for all those who can relate to Ted Mosby's feelings and swear by the love quotes published on The Scribbed Stories-
You don’t control who you fall for. It can either turn out to be the best thing that ever happened to you or in some instances the thing which nearly crushed you. You are ready to cross oceans for this person, go through hell just to make his life a bit simpler or happier and think about his needs before yours. All your time becomes his time. His work is now your work. His problems have to have to be dealt by you. His happiness is your eventual goal.
You dearly love him but you can’t call him yours. You’ve got a problem with him being over friendly with a girl but you can’t object because you who the hell are you to say anything? And questions like “Why won’t he like me back?” “What am I doing wrong?” “Why does this have to be so complicated?” will frequently visit you. All of your friends will have different theories which will soon reside in your thoughts. While friends will make you regret all the times you went out of your comfort zone for him, tv shows and movies will influence you to keep trying until the one-sided liking turns into an epic love story which you can years later recite. Even after you’ve genuinely tried to move on, there will be reminiscences which will pull you back to where you were in the first place. Something about him will make you want to hang around for some more time. You’d wish each day for him to change his mind. For him to say those words which will be like music to your ears. You’d want things to fall in place. You’d only want this and nothing more.
They say when you meet someone you want to keep around, you do something about it. You keep loving him till one day he gets so consumed in your love that the epic love story you'll tell years later will finally begin. And if not, then one day somebody who is actually meant for you will come along.

Posted by Shweghna Gursahaney at 05:31