Roberto Cavalli is one of the greatest designer the world has ever produced. And to rip off his creation needs guts!. Bollywood actress Kareena Kapoor took up this challenge, while filming a song for her latest movie offering Ra.One.
According to newspaper daily, Kareena wanted to look glamorous for the track Criminal from RA.One. So she chopped off the gown upon her designer - Manish Malhotra's advice. "The dress that I wear in the song was actually cut from a gown. The look needed to be glamorous. It was Manish's idea and I think it was great. It was a Roberto Cavalli gown made into a sexy dress," Bebo told Mumbai Mirror.
"We chopped the gown on the sets. The song required that. We cut it out and it worked for the better. Kareena looked hot and we are getting super response to it. Her looks in RA.One are very different from Golmaal 3 and Bodyguard. Feels superb," Manish told the tabloid.
The best part is, you get to see this 'change' between gown and mini dress. 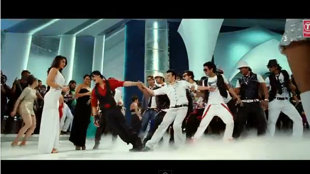 Kareena In Her Roberto Cavalli Gown